While the American League gave us some exciting games last night, today begins the NLDS and we are here to give you a preview and our prediction for who will come out on top for each series.

We will begin possibly the most intriguing matchup of the entire Divisional Series round as the reigning World Series Champion Cubs take on the Nationals.

The Nationals have played very consistence baseball all season long relying on their strong pitching staff as they cruised to a 97 win season. The rotation for the Nationals is so good, that there are 2 pitchers in the running for the Cy Young Award this season with Max Scherzer and Stephen Strasburg. Both pitchers ranked in the top 5 among NL pitchers in both ERA, opponent batting average and WHIP. Scherzer ranking leading the NL in opponent batting average and WHIP while also leading the NL in strikeouts. 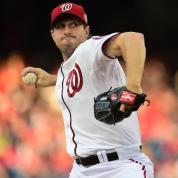 Scherzer has been dominant all season long and of his 31 starts this season, he only allowed 4+ runs in 5 games. Unfortunately, 2 of those games were in September and had his worst outing of this season on September 13th when he allowed 7 runs against the Braves. Scherzer did seem to get back into form before the season ended by allowing just 1 run on 4 hits and 2 walks over 9.1 innings in his final 2 games while striking out 15. This will likely be the version of Scherzer that we will see in Game 1 against the Cubs. While Scherzer’s health is still in question, expect to see him record many strikeouts and no more than 3 runs to score while on the mound against the Cubs.

Strasburg on the other hand has been downright

unhittable since returning from the DL on August 19th. In his final 8 games of the season, Strasburg struck out 63 batters in in 53.2 innings while allowing just 43 baserunners and 5 runs, good for a WHIP of 0.80 and an ERA of 0.84. Don’t expect things to change much in the playoffs as Strasburg’s dominance is sure to continue.

What about the #3 pitcher, Gio Gonzalez? Well he ranked 5th in the NL in ERA and WHIP. Both statistics would be even better if Gonzalez didn’t drop off dramatically down the stretch. His last 4 starts of the season were disasters as he allowed a combined 16 runs on 22 hits and 10 walks in 21.1 innings. This could spell trouble for the Nationals as Gonzalez is expected to start Game 2. This would put Scherzer in for Game 3 and if needed Strasburg in Game 5.

So, who will pitch Game 4? The only other pitcher on

the roster with over 15 starts this season for the Nationals is Tanner Roark. If a Game 4 is necessary then the Nationals fans are hoping to go into it with a 2-1 lead because Roark has struggled all season. He has allowed 2+ runs in all but 1 start since May and in his last 2 games of the season he gave up 8 runs in 5.2 innings. The previous 3 starts were slightly better, giving up 8 runs in 21 innings. If the Cubs go up 2-1 in this series then the Nationals may elect to start Strasburg here and give Gonzalez the go-ahead for Game 5.

On the offensive side, the Nationals are a solid unit of hitters. Though they don’t have the power numbers like the other NL teams remaining in the postseason they are a unit that gets on base and scores a lot of runs. Despite ranking 14th in homeruns, the Nationals ranked 2nd in slugging percentage. They also had the 3rd highest team batting average this season as they had 5 players end the season with a batting average over .300. They also rank in the top 5 in runs scored, steals, doubles, and RBI.

Can the Cubs stop this offense? The Cubs have announced their four starters for the NLDS as Kyle Kendricks, Jon Lester, Jose Quintana and Jake Arrieta. This rotation a year ago would have had fans excited, but this season wasn’t great for these four. Hendrick is by far the best of the bunch though as he was a true tale of 2 seasons. Before going on the DL in June, Kendrick had a 4.09 ERA and 51 strikeouts in 11 games. However, he returned from the DL in July as a whole new man. Since his return Kendrick posted a 2.19 ERA with 72 strikeouts in 13 starts. The only think working against Hendrick in this series is the fact that he going up against Strasburg.

The rest of the rotation has been lackluster this season, especially down the stretch. Jon Lester suffered a horrendous August with a 7.85 ERA. He began September with a 6 inning performance in which he gave up 3 hoeruns. Thankfully he has settled back into his groove, allowing 2 or fewer runs in 4 of his final 5 starts, but he had one terrible game on September 20th in which he was chased from the game after 4.1 innings after allowing 7 runs on 8 hits and 3 walks.

Quintana had an overall great September, but showed inconsistency throughout the month. He threw a 3-hit shutout sandwiched between 2 games in which he did not get out of the 6th inning and let up a combined 7 runs. Similar to Chris Sale of the Red Sox, the Cubs are hoping to see the dominant version of Quintana because if his inconsistencies come out, then it may mean a short postseason for the reigning champs.

The Game 4 starter, if needed, will be Jake Arrieta. Another case of, “Who will show up on game day.” August was outstanding for Arrieta as he struck out 37 batters in 37.1 innings while posted a 1.21 ERA through 6 games. In September, he pitched 10.1 innings in 3 starts and posted a 6.10 ERA while allowing 18 baserunners. With the pressure on, Arrieta has proven last year that he can come through.

As far as the hitting goes, the Cubs are fairly average. They ranked near the middle or bottom of the league in team batting average, homeruns, strikeouts, doubles, and steals. They did rank top 5 in runs scored, RBI and walks though. Not one player on the Cubs ended the season with a batting average over .300 and Kris Bryant is the only player with an OBP over .400 for the season. They have a few players with homerun power in Rizzo, Schwarber and Bryant.

Game 1 will be the most exciting game of this series as Strasburg duels it out with Hendricks. This will be a classic rubber match with few runs being scored. Both teams are scrappy in the way they score their runs so enjoy an old fashioned baseball game here. I see this one going to the Cubs in the late innings as they scratch out the go-ahead run off the Nats bullpen. Game 2 will be a sloppier game with a high score that will go to the Nationals as they chase Lester from the game before the end of the 6th inning. Game 3 will also go to the Nationals as Scherzer shuts down the offense. In Game 4, the Nationals will go the conservative route and go with Roark who will get pushed around. Arrieta will have one of his better performances to force a Game 5 showdown. Once again Strasburg will get the call against Hendricks. This time around Strasburg will go deep into the game, not trusting the bullpen, in order to secure the win and advance to the NLCS.