After the excitement of the AL Wild Card Game between the Yankees and Twins on Tuesday, it is now time to go all in on the playoffs. We are now entering the ALDS where big picture strategy comes into play as teams now need to win 3 of 5 games to advance to the ALCS.

Let’s start with the Yankees vs Indians series which begins today at 4:30pm in Cleveland. 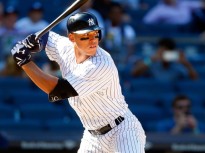 As noted in our preview of the Wild Card game, the Yankees have a dangerous lineup and have really hit their stride down the stretch. In their win over the Twins on Tuesday, the Yankees hit 3 homeruns and scored 8 runs on 9 hits. The bulk of the offensive production came from the top of the lineup. The 1 through 4 batters in the lineup combined for 7 hits and 6 RBI while also scoring all 8 runs for the Yankees. Judge and Gardner were the most dangerous in the Wild Card Game, each hitting a homerun and crossing home 3 times throughout the game.

Throughout the ALDS, expect the Indians to be

While most fans focus on the power of the Yankees lineup, which the Yankees did hit the most homeruns of any team in the Majors this year and also scored the 2nd most runs and drove in the 2nd most RBI. What is often overlooked is the Yankees strikeout ratio. The Yankees batters have a strikeout percentage of .247 compared to the Indians .209. Why does the matter? The Indians pitching staff recorded the most strikeouts of any team in the MLB this season. Another stat that will play a huge factor is that the Indians pitching staff has allowed the fewest homeruns in the MLB this season. So, the Yankees are fitting perfectly into the Indians’ strengths in this matchup.

As of the time of this writing the Yankees had not officially announced their probable pitchers for the ALDS. But let’s take a look at the options.

Sonny Gray – If Gray gets a start, which rumors have circulated about him starting Game 1, then he will need to pull himself together and bring back his summer days efficiency. In the month of July and August, not many pitchers were better than Sonny Gray. During that time frame Gray pitched 9 games (4 for Oakland, 5 for Yankees) allowing just 13 earned runs while striking out 51 batters in 54.1 innings. Unfortunately, in September he gave up 9 homeruns and allowed 18 earned runs in just 35.1 innings over the course of 6 starts.

Masahiro Tanaka – Tanaka is another story of hopes

for the Yankees. 2017 has not been kind to Tanaka who struggled throughout the season. He has been very inconsistent this year, giving a dominating performance of allowing 1 run in 8 innings off of just 2 hits while striking out 14 to following it up 2 starts later with an outing in which he lasted 4 innings, allowing 3 runs on 5 walks. Tanaka did give his best performance of the season in his final regular season start as he pitched 7 scoreless innings while allowing just 3 hits and struck out 15. The Yankees are desperately hoping that Tanaka’s final regular season game was a sign of good things to come in the playoffs for the Japanese hurler.

Luis Severino – Clearly the ace of the Yankees staff, Severino finished the regular season among the top 5 AL pitchers in ERA, WHIP and strikeouts. However, he unraveled in his first postseason appearance of his career against the Twins. The Yankee offense was able to bail him out of the Wild Card game, but if Severino is unable to settle in against the Indians then this will surely spell defeat for the Yankees.

CC Sabathia – He is on a slow climb back to his former glory, but is still a long way off. He has failed to last 6 innings in 6 games since the All Star Break and has gone 7 innings just once. This puts a lot of pressure on the bullpen, as nobody in the Yankees rotation is reliable enough to give them a break. Long outings for the bullpen will wear them down and cause their dominance to deteriorate, especially after having to pitch nearly the entire game against the Twins on Tuesday.

What about the Indians? Can they hold off the Yankees offense?

When it comes down to playoff baseball one thing has rung true more times than not and that is the notion that good pitching beats good hitting. This series will put that theory to the test.

The Indians pitching staff is among the best in baseball this season and they are now given the task to slow down the most dangerous offense in baseball. The Indians have decided to start their ace pitcher, Corey Kluber, in Game 2. While many disagree with

this strategy, it makes a lot of sense because this allows Kluber to pitch the deciding Game 5 if necessary. With the Yankees explosive offense, it is smart for the Indians to consider a Game 5. Kluber has been dominant for a majority of the 2017 season, but has been downright unhittable down the stretch. Not counting his final start when after the Indians had clinched, Kluber ended the regular season with 6 consecutive victories while pitching at least 7 innings in each start. He also had an unbelievable 1.06 ERA and 0.75 WHIP while striking out 57. Against the Twins on Tuesday, the Yankees scored 6 runs on the long ball. Kluber has allowed fewer than 1 homerun per 9 innings this season. However, Kluber did have a stretch in which he allowed at least one homerun in each start for 9 consecutive games.

Carlos Carrasco – Another pitcher who does not give up many homeruns. Carrasco allowed just 2 homeruns in his last 7 games of the season while posting an equally impressive 1.27 ERA, 0.84 WHIP and striking out 59 batters in a combined 49.2 innings. Once again the Yankees are perfectly aligned with Carrasco’s strengths.

Trevor Bauer – Looking at his season totals many may overlook his quality as the Indians’ Game 1 starter. His 4.19 ERA is a bit of an eyesore for the 26 year old Bauer. But if you take a look at his performance down the stretch it tells another story. In his final 13 starts of the 2017 season Bauer put up a very respectable 2.42 ERA while striking out 85 batters and allowing just 11 homeruns (3 of which came in one game). 9 of those homeruns Bauer allowed were solo shots which shows that he is very careful when men are on base.

Okay, so the Indians can pitch, but can they score runs? 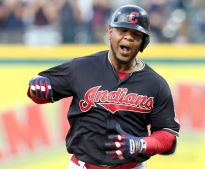 Though the power production of the Indians isn’t nearly as high as the Yankees, the Indians do have 4 players with homerun potential in Edwin Encarnacion, Francisco Lindor, Jose Ramirez, and Carlos Santana. However, the Indians’ offensive specialty is their ability to get on base. The Indians as a team ranked 2nd in the MLB in On-Base Percentage, Slugging, and OPS. They also ranked 2nd among AL teams in team batting average and 3rd in runs scored.

The Yankees may steal a win from the Indians in Game 1, but it won’t come easy. The Yankees will come alive in the late innings against the Indians’ bullpen to score the runs needed to secure a Game 1 victory. Games 2 and 3 we will see Kluber and Carrasco hold the Yankee offense at bay to give the Indians a 2-1 lead in the series. Game 4 will not be  pretty one for either side as this high scoring affair will eventually go to the Yankees. Bringing on a Game 5 showdown in which Kluber is expected to go deep into this one. Kluber’s consistency will reign supreme with a nail-biting victory over the Yankees to secure their spot in the ALCS.