Late Night in the Phog is finally here! If you’re going to the event here is the info! 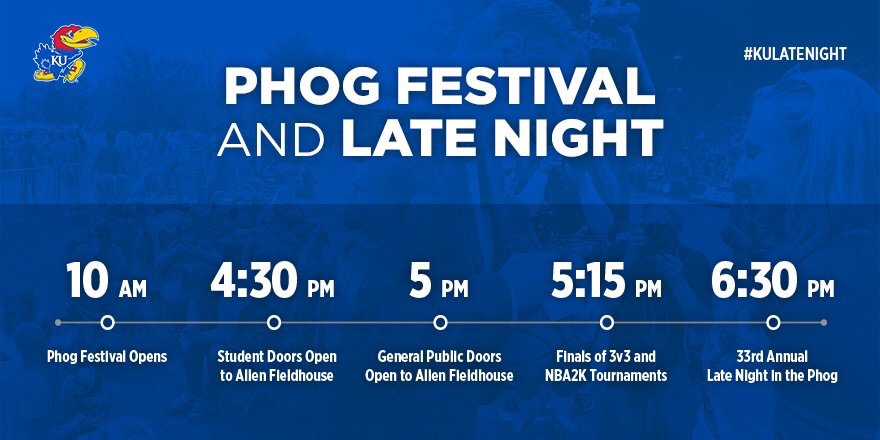 Finally the Kansas basketball season “officially” starts today. Now we still have some time before games but today is officially the first practice of the year for the Jayhawks. Late Night in the Phog is an amazing experience and a must see event. All the highly recruits will be there, Allen Fieldhouse is sold out (like always) to watch the Jayhawks ‘practice’. There is a scrimmage that the team plays but really the players just go out there, dance around, put on a show and just enjoy themselves for the night.

But Late Night does mean the Kansas basketball season is starting. So let’s break down the roster, Late Night in the Phog edition.

*In parentheses will be projected minutes*

Jack Whittman was supposed to add depth to the front court. In the original projections he was even slated to start to offload some pressure of having to play small. Yes, Kansas has McDonalds All American Billy Preston coming in, but unless you are Andrew Wiggins or Josh Jackson, freshman have to earn their minutes. Look at Kelly Oubre, Cliff Alexander, Joel Embiid, etc… So Preston won’t start right away unless he completely blows away Self in the preseason or in Italy when they play there this month. Now, it may seem like Vick will start and Kansas will roll out a similar roster construction as last season. Kansas will space the floor, shot threes, have four players capable of handling the ball as the feature Azibuke in the middle. Expect huge numbers from Azibuke in his sophomore season.

*In parentheses will be projected minutes*

Sam Cunliffe is not eligible to play until after Christmas due to transfer rules so his minutes are not included yet. However, when he does become eligible Cunliffe is a very good guard/forward and will get around 15-20 minutes a game for his first year at Kansas.

Now, the minutes will vary. Udoka is Kansas only true center so when he goes to the bench Kansas will play with likely play with there 4 guard lineup again, with Lightfoot at the 5. Unless they want to put Preston at the 5 and really stretch the floor but that won’t happen often. Mitch Lightfoot proved that he can be a valuable player last year for the Jayhawks and he’s going to have to play a big role for the Hawks when Udoka is on the bench. The rebounding ability of Lightfoot and Preston will be the X-factor for Kansas success this year.