So if you don’t already know, the best basketball coach in the WORLD, Bill Self, is inducted into the Basketball Hall of Fame and it was well worth it.

Listen to every player who’s played for him, every coach who’s coached under him, and listen to what they say about him, listen to all the compliments they give him, listen to all the things he does for these guys. There is a lot of players and coaches and people that wouldn’t be anywhere near where they are now without Bill Self.

Look at Frank Mason for example. Mason was a high school fail out, going nowhere in life fast and then Self gave Mason a chance of a lifetime and look at where it’s got Mason. National Player of the Year. One of the most decorated players in Kansas basketball history. NBA draft pick. Bill Self changed this life.

This is what a real coach is like with players. This is how every coach should be. This is what they should mean to their players

Frank Mason walking off the court for the final time at Allen Fieldhouse, obviously, very emotional. To Frank, Kansas is basically all he knows. But look at Bill Self’s face. It’s just pride, enjoyment, happiness. Coach Self knows how successful Frank was for Kansas and how successful he is going to be.

That’s what a coach is all about.

That’s not even the full resume, but what a helluva resume it is. There is not many coaches out there can match what Bill Self has done.

You can’t even knock him by saying “Oh he’s only been to 2 Final Fours…”. To those people, I just say Shut your mouth and just appreciate greatness. The NCAA Tournament is the hardest playoff to win. It is not an easy thing to win. Bill Self will win another title. He’s been to 7 Elite Eight, he does well in the tournament. The NCAA tournament is extremely difficult to win.

Bill Self took them and made them lottery picks.

It’s amazing what Bill Self has done for these kids in basketball terms. Taking kids, who never thought they would have a chance to make a living playing basketball, and making them multi millionaires and successful careers.

Everything he has done, it’s been remarkable. Every player who has played for him has never uttered a word of negativity. Even when players don’t pan out at Kansas, players are just grateful for the opportunity to play for Coach Self.

Coach Self absolutely deserves this honor, and truthfully, it was overdue.

Coach Self preaches family at the University of Kansas, he preaches that no player is bigger than the team, and that’s true, because we can all agree, that without Coach Self, there is no family, and this program is no where without the greatest coach in the world.

Thanks for the awesome memories Coach Self and congrats on the HUGE accomplishments. I look forward to watching many more Big 12 Championships and more National Titles.

Thanks for being such an awesome guy when I had the pleasure of meeting the greatest coach in the world. 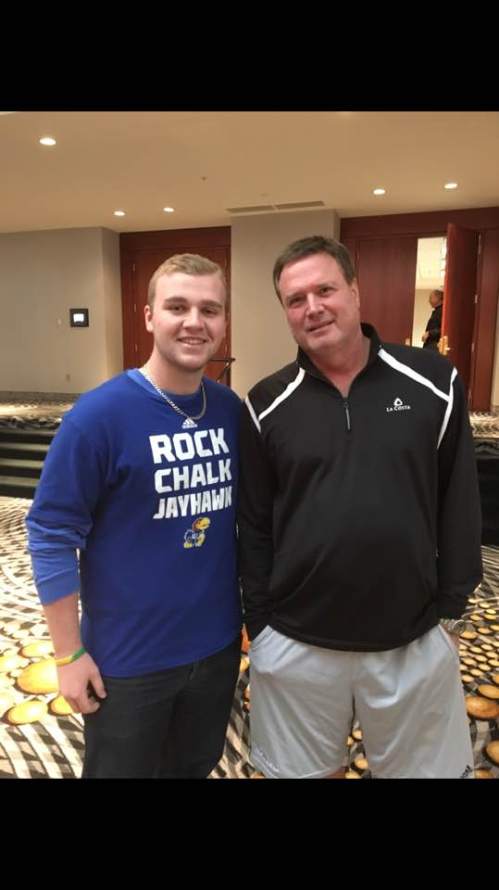