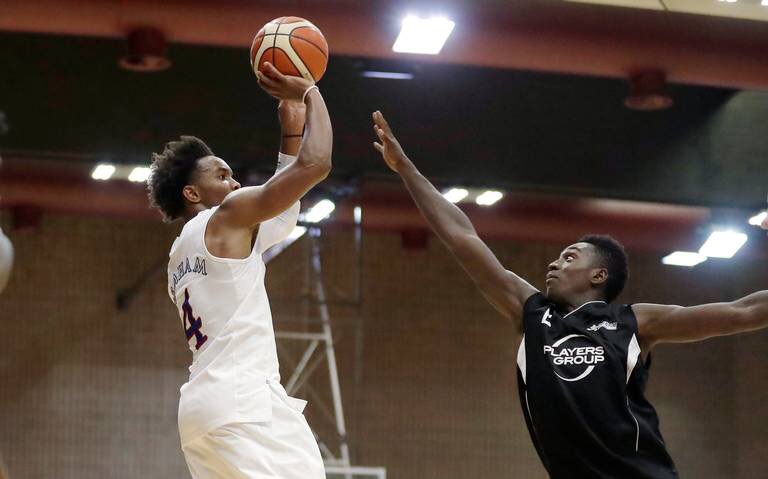 This week we got a little taste of what the Kansas Jayhawks 2017-2018 season could look like. Granted, they didn't play the best competition in the world, but going 4-0 playing together for the first time as a collective group is still an impressive accomplishment. Oh, and they won each game by an average of 34.3 points. So yeah, it's impressive.

But let's look at it by not the margin of victory, but who stood out to get the wins.

Malik Newman: Man oh man. This man was on fire all tournament long and by far the best player on the court for Kansas. Newman was scorching hot in the finale, scoring 32 points. Newman can flat out score the ball and if he keeps this up, it won't be a shock to people if he walks away with BIG 12 Player of the Year. Newman can light up the box score. As long as Newman gets his assists numbers up, he can be a player to lead Kansas to a national title. He was that good.

Devonte Graham: Another masterful tournament. Graham didn't exactly light up the scoreboard for scoring for himself. No, he showed Kansas fans and his teammates exactly what he needs to be this year. A Point Guard. The way Graham orchestrated the offense, by dropping dimes everywhere, outlet passes, running the tempo, getting steals, Graham was all over the place. We've seen Graham can light up a scoreboard, we know what he can do, but this will be the first season Devonte is running the Point without Frank being here and Devonte scored an A+ playing Point Guard this tournament.

Svi: Svi being svi. What else could you expect? The guy was on fire shooting all tournament long. It seemed as if his shot was as fluid, comfortable and confident as its ever been. Svi returns for his senior year after getting advice from NBA scouts at the Combine. Who knows what they said, but it seemed like Svi is playing with a chip on his shoulder and that's very good news for Kansas fans. This could be a breakout year for Svi. And it will be.

LaGareld Vick: Talk about a breakout player. Vick is going to have a monster year for Kansas this year, if he shows even just a little what he did in Italy. His shooting, athleticism, height, should have him flying up draft boards by the end of this season. He dominated in Italy, shooting 3's with confidence in stride, throwing down monster dunks, getting to the paint. Kansas needs that from Vick this season and he's ready to deliver.

Udoka Azubuike: He may only played 2 games, but he was a beast. No one can defend Udoka in the paint and once he muscles his way in there, it's just about over. He is stronger, bigger than anyone in college hoops. As long as he stays healthy, which Kansas desperately needs him too, he can be a monster all season long. Especially since Udoka almost broke 4 baskets in Italy.

Marcus Garrett: I wrote how Marcus Garrett was a player to watch on this trip. You can read it but clicking here. A little shaky his first game but in the next game? 10 points, 12 rebounds. At first it seemed as if Garrett wasn't going to play that much this season for Kansas since they already have the 4 guys mentioned above and Sam Cunliffe (who was also good but could've been better in Italy). But since Kansas doesn't have a true backup point guard, Garrett proved that he can run that position and be an asset for Kansas this year. Garrett has the height and the skills. He needs to be polished a little more but he took a big step forward this past week.