Biggest college hoops story of the day is coming from Bowling Green, Kentucky. 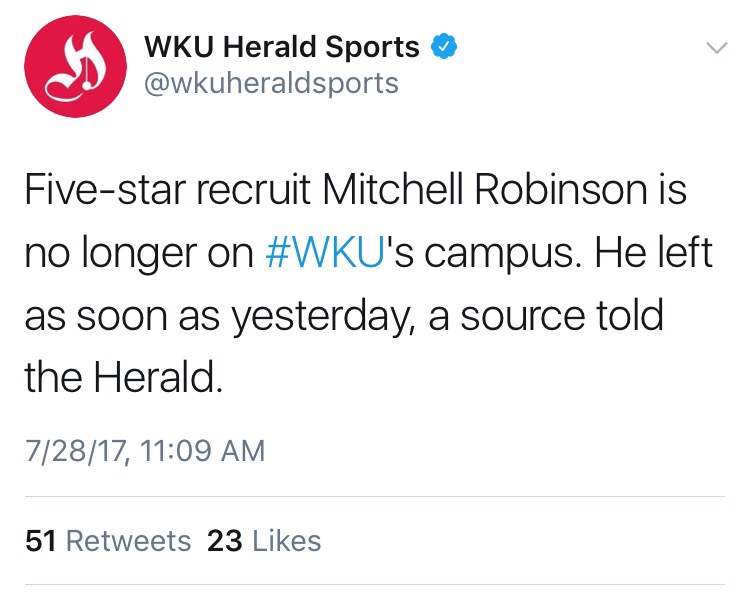 Robinson was the clear favorite for Freshman of the year in Conference USA and Western Kentucky was to emerge as a contender to Middle Tennessee State.

Robinson is a projected one and done and will be a first round pick when eligible.

More news is too come on this once more information is announced.

Until then, good luck Western Kentucky fans sorting through this drama.

More news has broken about the Mitchell Robinson fiasco.

According to ESPN's Jeff Goodman, Robinson has been suspended indefinitely for violation of team rules.

Seeing how this is a useless suspension since Robinson is no longer enrolled in the school, it is notable as it pretty much means the end of the road for Robinson at Western Kentucky.

A source close to Goodman, said Robinson no longer has interest in playing at Western Kentucky and would be ok with transferring and sitting out a year.

Plenty of top tier programs with open scholarships will display interest in Robinson. However, head coach Rick Stansbury could block him from certain schools.

Continue to follow for more information on this story.

UPDATE: Mitchell Robinson granted his release. Can transfer to any school not in Conference USA. Where Robinson will land is a question. He has been eyeing LSU. But Kansas can be a dark horse as they just opened a scholarship after Jack Whitman decided to transfer.

Now all that has to happen is the NCAA giving him the waiver to transfer.