Ryan Lochte will always be considered one of the best male Olympians of all time. During Lochte’s 12-year, four Olympic games career, he has won 12 career medals in the sport of swimming, which includes six gold medals. There is no denying what Lochte does in the pool is complete and utter greatness, it’s the out of the pool in which Lochte has gotten himself in trouble. Ryan Lochte found himself in a tough situation after his events concluded in Rio.
Let me set something straight before we dive into this story that has been circulating the news for weeks. First, Lochte is not the most intelligent Olympian of all time. I say this after watching his interviews before a swim race, after a swim race and all the interviews in between. Lochte just doesn’t give the best interviews. The words he uses are basic, the sound of his voice is shaky and the answers he gives always leaves the interviewer wanting more. With that said, Lochte never found himself getting into any legal trouble in the United States. However, on Brazilian soil that changed for the worst.

Lochte and three teammates were in the wrong after their events in the Olympics ended. Lochte and his teammates were finished, they had no more responsibilities and accomplished so much during the stay at Rio. The four of them decided before they were going to leave to go back to the States they would celebrate for a night. Remember these athletes train for years for the Olympics. These athletes don’t have much downtime while they train. I’m more than OK with Lochte and his teammates going out after their events were completed. I mean by all means, they deserve it. They represented this country very well at the games. Now, what they did that night is in question. The four of them did get into trouble and they were in the wrong, there is no denying that. The four of them got very drunk and were not in a stable and suitable state of mind. The four swimmers took a taxi to a local gas station and supposedly “destroyed” the bathroom. One, they did not destroy the bathroom. Yes, they urinated on the floor, which is completely wrong and yes, there was a small, small crack in the bathroom mirror, which is also wrong (http://www.usmagazine.com/celebrity-news/news/ryan&#8230;). I’m not denying that. Any United States Olympian should not represent our country in that manner, they should know better. 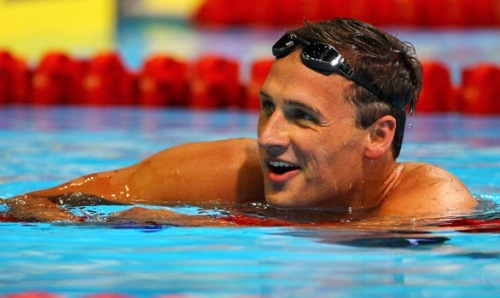 But let’s not sit here and make headline after headline in the news about a dirty bathroom that could be cleaned and fixed in like 20 minutes. Yes, Lochte came out and said that he fabricated the story a little bit, which is true because Lochte said the Brazilian police held a gun to their heads and that the swimmers were robbed. This is not true. The gun was not aimed at the head, the Brazilian police took their guns out in case something transpired which I am completely OK with. Also, the swimmers were not technically robbed. If the Brazilian police thought the situation might arise to something more serious than I agree they should have their guns for protection. No, the guns should not have been pointed at their heads, but according to Lochte, that is false anyway. The swimmers ended up being released and Lochte found himself on the next flight home to the United States. However, the Brazilian judge ordered for a search and seizure of the swimmers. Lochte and another swimmer, Jimmy Feigen, already returned to the States. The other two swimmers Gunnar Bentz and Jack Conger were caught in Brazil and had to faces consequences. The two swimmers had to pay a total of $11,000 and agree to the fact that Lochte made up the entire story, just to leave the country and return to the States. The swimmers agreed and paid the fine. However, when they returned home they said they would’ve said anything to get home and that Lochte’s story was not far off.

The police did pull guns on them, they did not destroy the bathroom and the fact was that everything that was destroyed in the bathroom, the swimmers gave the gas station money to replace it. That is what I have most troubling with the story. The swimmers cooperated with the police, they gave money to replace the damaged items in the bathroom. Yes, I realize that the swimmers were wrong, and yes, I realize Lochte was wrong too. These Olympians should represent the country better. But the fact is, these Swimmers went to compete in the Olympics, in which they trained years to do, won many medals to help the United States win the Olympics and then went out to party after they have already competed.

I believe that the story was completely overblown. I know Lochte exaggerated parts of the story, but Lochte ended up losing four sponsorships, two huge ones (Speedo and Ralph Lauren) and a total of one million dollars because of the lost sponsorship’s. Don’t you think that’s a little absurd? Because I sure do. There is plenty of trouble going on in this country that is not being talked about ,yet let’s talk about Ryan Lochte and three other Olympian swimmers who tried to have a good time in Brazil. Not even in the United States, this happened in Brazil.

The other main thing that is troubling for me is the loss of sponsorships. NBA Star Draymond Greene was arrested for assault earlier this summer, yet loses no sponsorships. Draymond Greene was drunk, on American soil, arrested by American police, for committing assault but loses no sponsorships. And that’s OK? I am at Ryan Lochte defense, in some ways. This whole situation should have never happened. They were just trying to have a good time after the Olympics. And you know what? Who knows? Maybe the Brazilian cops did try and threaten the swimmers and maybe they did try and rob them? We don’t really know the full details. Lochte can just be saying that to save face. I’m not just going to give the Brazilian police and their corrupt government a free pass. We need to realize the fact that this story shouldn’t make national headlines for weeks. The swimmers should not have had to pay $11,000 to leave Brazil and Ryan Lochte should not have had to lose sponsorships. Yes, they should’ve represented the country better, but no it should not have been blown out of proportion like it did.

Ryan Lochte deserves a second chance and thankfully the company Pines Bros. gave him another sponsorship and another chance. I fully expect these swimmers and Ryan Lochte to compete and represent the United States in a positive way again.