Last night, the 2017 NBA season officially concluded with the Warriors knocking off the Cavaliers 129-120 to win the NBA championship in 5 games.

The super team Warriors led by the MVP duo of Steph Curry and Kevin Durant provided to many offensive mismatches for the Cavs to handle.

Despite LeBron James averaging a triple double for the Finals, the Cavs could not defensively handle the firepower the Warriors had on offense.

With a scapegoat needed, rumors have already begun to circulate the Cavs may look to trade Kevin Love seeking more star power on both sides of the ball.

Love did not necessarily have a bad NBA finals. He averaged 16 points with 11.2 rebounds per game and shot 38.7% from the three point line.

However, his toal field goal percentage was a measly 38.8% and he committed nearly three fouls per game.

Love struggled with his pick and roll defense as his lateral quickness was not effective enough to keep up with Golden State’s speed.

Love does have three years remaining on his contract as he signed a 5 year 110 million dollar extension with the Cavaliers prior to the 2015 season.

He has been a key cog to their success in the past three seasons but in no ways untouchable. Having said that, lets take a look at some potential trade options the Cavaliers may seek if they are trying to shake up their roster for the next season.

All trades work under the NBA trade machine and fit the necessary salary cap requirements.

The Nuggets narrowly missed out on the playoffs this year and they have been craving an all star for awhile. They have found their franchise center in Nikola Jokic and Love will be an excellent fit next to Jokic style of game. The duo would be the NBA’s best passing big men combination. The Nuggets have been rumored to have interest in trading for Paul George and Blake Griffin in the past so they’d be willing to pull the trigger.

The Cavaliers need wings that can defend and shoot the three. Wilson Chandler is coming off a season in which he averaged 15.7 points and 6.5 rebounds. He wold provide good size to match-up in small ball lineups. Will Barton was in contention for the 6th man of the year award and is on a team friendly contract. He would provide immediate impact to the Cavs bench that struggled mighty in the Finals. Barton is a 6’6 guard capable of being a playmaker and setting up teammates with the ball in his hand.  He is only 26 years old and could be a future piece going forward. At 13, the Cavs will have the option to take Justin Jackson from UNC (projects as three and D wing), Lauri Markkanen from Arizona (best shooting big in draft, will help space floor) or Donovan Mitchell from Lousiville (explosive athlete capable of defending at a high level). Each has a different style of play but would immediately upgrade the bench. 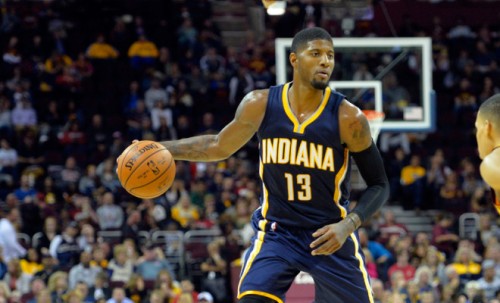 Why the trade makes sense:

It’s no secret Paul George is leaving Indiana when he becomes a free agent in 2018. The Pacers should look to find whatever value they can get. They are not likely to get much as everyone knows they have no leverage. In this scenario, it’s the best possible outcome as it allows them to begin their rebuild. They obtain the 4th pick (Josh Jackson, Jayson Tatum, De’Aaron Fox?) the 8th overall pick in 2016 in Marquese Chriss and a future first from Cleveland.

The Suns may value the prospect they can get at 4 very highly but the intrigue of adding Love for three seasons may be worth than the prospect they may add. Love will immediately become the teams best player. The Suns go for the star player as they look to accelerate their rebuild.

The Cavs immediately upgrade pulling in Paul George and would vault them into Golden State Warriors territory. A big three combination of Paul George, Kyrie Irving and LeBron James would be as good as it gets in league history. The offensive and defensive mismatches they can create would cause havoc for the league. George will all but likely remain with the Cavs and compete for rings instead of departing for free agency.

Why this trade makes sense:

This trade is essentially the Cavs swapping Kevin Love out for Carmelo Anthony and Portland being a third party to make the trade work financially.

Carmelo Anthony is one of basketballs premium scorers and can provide the offensive firepower Love could not in the NBA finals. The personal relationship shared between LeBron James and Carmelo Anthony is the definitive factor as Anthony would need to veto his no trade clause.  Anthony is a better scorer individually than Love and in a series with Golden State that was mostly defined about who can reach 120 points first, Melo provides that upgrade.

Portland will be able to land Love in exchange for two role players and two mid level first round prospects. Not a bad deal to form a big three of Damian Lillard, C.J McCollum and Kevin Love. This would be one of the more dynamic offenses in basketball that will be together for the long term. Love is originally from the Oregon area so this will be a homecoming for him.

The Knicks do the deal as Phil Jackson tries to accelerate his rebuilding process. Phil has already made public statement that Anthony would be better off playing some where else next season.

The Knicks would be able to add a defensive first player in Mo Harkless who has displayed some offensive potenital improving his three point percentage to 35.1% this past season and Allen Crabbe who is a three and D wing cable of lighting it up from the outside.

This would be a win-win for all parties involved.

Now, not saying any of these trades will happen but these are interesting scenarios that can play out if Cleveland decides to move Kevin Love.

If you think of any other possibilities that may work or any other trade ideas, feel free to reach out to us on Twitter.

Let us know of any feedback you may have.