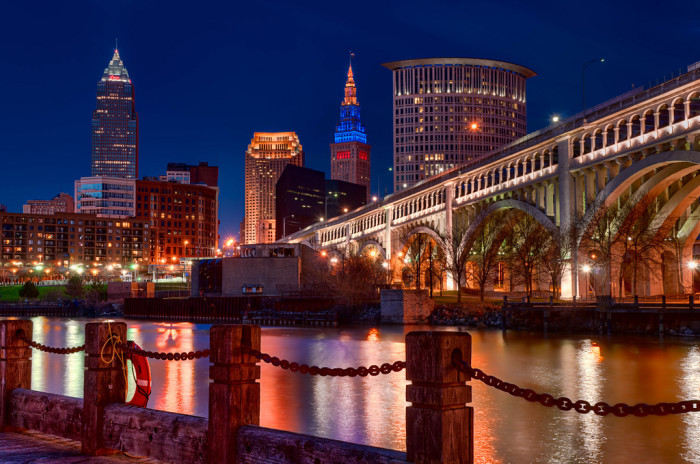 If you can ignore the Browns, Cleveland is on the rise as one of the best sports cities in the country with the Indians winning the ALCS and falling just short of the World Series Championship last year and sitting atop the AL Central this year while the Cavaliers are the reigning NBA Champions competing in their 3rd consecutive NBA Finals. So, there is no better time than now to visit this booming city of sporting excellence and get your your competitive juices flowing with some of the best races in the Forest City. The biggest race in Cleveland is the Cleveland Marathon

which provides runners with amazing views of Lake Erie and downtown Cleveland. For a beautiful run through Cuyahoga Valley National Park then take your pick of any of the three races in the Towpath Trilogy. The Trilogy offers a half marathon in April, 10k or 10-miler in June, and a full marathon in October.

Cleveland is also home to some unique races like the Ohio City Run and Crawl 5k which concludes with a pub crawl through the city of Cleveland and new to the 2017 race, runners receive one free beer from participating locations. Another race series that spotlights the craft beer scene in Cleveland is the Rock N Hops Race Series. Each of the 4 races in this series runs through a different section of the city and is sponsored by a different brewery where runners gather for the post-race cool down complete with beer.

If you don’t feel like running and would prefer the brews then make sure to stop at some of the top craft breweries in Cleveland. Masthead is one of the newest breweries making a name for itself in Cleveland by serving up American and Belgian style beers and wood-fired pizza. The older brother of Cleveland Brewing is the Great Lakes Brewing Company. GLBC has been brewing in Cleveland since 1986 and now brews over 100,000 kegs of beer per year and has over 100 beers so head over and see what they have on tap this week. Travelling with a liquor drinker in the bunch? Then check out Portside Brewery and Distillery where they serve up craft brews and distill their own rum. For those looking for something unique then head to Speakeasy where this Prohibition Era lounge serves up some classic cocktails. What is the perfect compliment to a cold beer? A hot dog of course and there is no better place to get a hot dog than at Happy Dog in Cleveland. With 50 toppings to choose from you can create your perfect hot dog.

Now that we are a bit tipsy and stuffed with hot dogs, let’s check out the sites.

As mentioned earlier, Cleveland sports are coming into their own right now so a stop at Quicken Loans Arena for a Cavaliers game or Progressive Field to see the Indians is certainly in order. You may also want to check out the Browns at FirstEnergy Stadium, or get your fill of football by traveling an hour south to Canton and visiting the Pro Football Hall of Fame. The Pro Football Hall of Fame currently has over 300 inductees including 2017 inductees; Kurt Warner, LaDainian Tomlinson, Terrell Davis and Jerry Jones who will be formally enshrined this August.

Football isn’t the only Hall of Fame in Cleveland, it is also the home of the Rock & Roll Hall of Fame. This huge facility dedicated the Rock &

Roll sits on the shore of Lake Erie and is a great place to visit for music fans of all genres as it documents the entire history of rock and roll and includes a permanent exhibit displaying “Songs That Shaped Rock and Roll.” Along with thousands of artifacts and memorabilia from rock and roll legends, the building houses the Hall of Fame dedicated to the most influential and well-known artists, bands, and producers in rock and roll. Currently there are 5 categories for inductees, the largest category is Performers the other 4 categories are non-performers, early influences, lifetime achievement and sidemen.

Another museum of interest is the Christmas Story House and Museum. A holiday tradition for many families in America, the Christmas Story is a beloved holiday movie that follows Ralphie Parker as he dodges bullies and dreams of his ideal Christmas gift, a Red Ryder air rifle. As you may know that movie was filmed in the city of Cleveland and Ralphie’s home is now a museum open to the public.

Other areas of Cleveland to visit are the West Side Market,

Little Italy, Cleveland Metroparks Zoo and Playhouse Square which is the largest performing arts center in the United States outside of New York. US History buffs may want to visit the James Garfield Memorial at Lake View Cemetery or walk on board the Steamship William G. Mather, a freighter that played an important role in delivering steel during World War II.

Thrill seekers should head over to Cedar Point where you can ride one of the 15+ high thrill roller coasters or cool off at Cedar Point Shores water park. Or place your bets at the Hard Rock Rocksino which hosts over 200 horse race nights per year also filled with over 2000 slot machines.