With Memorial Day coming up next week, we will be moving on from the South and heading to the Rockies as we explore the Mile High City. The city of Denver, Colorado and it’s surrounding area has many great things to do for those who enjoy the beauty of nature and is home to one of the largest races in the United States that culminates with the largest Memorial Day Tribute in the country.

The BolderBOULDER 10k takes place annually in Boulder, Colorado on Memorial Day. The BolderBOULDER race has one of the largest finish line festivals with over 100,000 spectators cheering on the runners as they take a final lap around Folsom Field, home of the Colorado University Buffaloes football team. The race culminates with the largest Memorial Day Tribute in the country taking place on Folsom Field at noon. Before taking on this race, make sure to give yourself time to adjust to the altitude as the entirety of the BolderBOULDER race takes place at an elevation of over 5250ft.

After running the race and celebrating our troops and honoring those who gave their lives you may want to see the many sights that the Rockies have to offer, but where to start?

The city of Boulder is 40mins to the northwest of

Denver, so to get the best out of your race vacation it may be wise to rent a car to see it all. While in Boulder, you must take a walk down Pearl Street. Over 1000 restaurants, shops, and businesses line this wide pedestrian-only area of the city. Some shops along Pearl Street that you should see are Into the Wind, Peppercorn and Boulder Book Store. You can also catch a show at the Boulder

Theatre, shop the # Farmer’s Market in the country or sip tea at the Dushanbe Teahouse, a handcrafted teahouse with stunning mosaics and endless tea options sent to the city of Boulder all the way from Tajikistan. Across from the Dushanbe Teahouse is the Boulder Creek Path, a series of walking trails that mostly follow along the Boulder Creek and end at Boulder Canyon. There are areas of the creek where you can take a dip or if you’re a thrill seeker then look into renting a kayak or tube to take down the rapids of the creek.

If hiking is your passion then make sure to visit the many hiking trails near Boulder. The most iconic landmark in Boulder are the Flatirons,

slanted sandstone formations to the west of the city. To access the Flatirons you can take one of several walking trails that begin at the Chautauqua Trailhead. Be sure to keep an eye out for the huge letters “CU” on the top of the Third Flatirons which was painted by two University of Colorado freshman in 1949. You can also hike up to the summit of Flagstaff Mountain or check out Eldorado Canyon State Park.

Other things to do in the city of Boulder include touring the University of Colorado Boulder or heading out to the Celestial Seasonings Tea Factory. Beer drinkers can take on the Boulder Beer Trail which has 30 breweries, distilleries and wineries around the city to do tours and tastings. For a unique tour filled with history, local legends and ghost stories you must take a ride on Banjo Billy’s Bus Tour. This yellow school bus turned traveling hillbilly shack can be seen throughout the city and is great fun for all ages. Banjo Billy’s Bus Tour also operates in Denver.

Alright Banjo Billy, onto our next stop… Denver.

The city of Denver is more populated than Boulder, so you will surely get the bigger city feel in comparison and with big cities come many

attractions. Denver is full of attractions for the whole family to enjoy. You may want to start by visiting Union Station in downtown. This transportation hub boasts some of the city’s top restaurants, bars and shops that you are sure to enjoy. Located just half a mile away from Union Station, Larimer Square is another area filled with restaurants, bars and shops and is the spot where Denver was founded. Also found in downtown Denver is the 16th Street Mall. Similar to Pearl Street in Boulder, 16th Street Mall is a 1.25mile pedestrian-only area lined with shops and restaurants.

Those interested in United States history will want to hang around near McNichols Civic Center. Located closeby are the US Mint facility where US coins have been produced since 1906. You can take a free guided tour of the facility, but make sure to get tickets early in the morning as they do sell out quickly. You can also take a free tour of the Colorado State Capitol Building nearby. Keep a mindful eye when walking up the western entrances staircase because

the 13th step marks exactly one mile above sea level. Another interesting place to tour is the Molly Brown House Museum. The museum is located inside the restored former home of Molly Brown, an American philanthropist, activist, and survivor of the sinking of the Titanic. 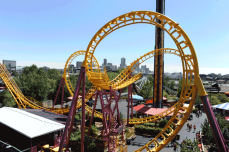 Into big thrills? Denver has three theme parks in the area. The most popular of these theme parks is Elitch Gardens, located along the South Platte River. With 6 roller coasters and 6 water slides this theme park will be sure to get your heart pumping. Just outside the city you can also visit Water World or Lakeside Amusement Park. Water World is a huge water park with nearly 50 rides while the Lakeside Amusement Park is a family oriented amusement park that is one of the oldest in the country.

When visiting Denver, you will want to have that rental car because some of the best sites are around 30 minutes to the east of the city along the Lariat Loop Byway. The Lariat Loop Byway is a 40-mile scenic route that takes you through

the foothills between Golden, Morrison and Evergreen and takes you by some of the top attractions east of Denver such as Buffalo Bill’s Grave, Red Rocks Amphitheatre, Boettcher Mansion and the Colorado Railroad Museum. However, the most popular site along the Lariat Loop Byway is the largest brewery in the world, Coors Brewery. Visitors are welcomed to take a free self-paced tour of the facility and sample some of their great beers straight from the source. You will also get a chance to check out some old pictures, neons, beer bottles, and other memorabilia as part of the tour.

Not into drinking? Then you may want to drive about 1.5hrs to the south of Denver instead and visit Colorado Springs. This area is filled with beautiful scenic hikes and places of interest like Red Rock Canyon Park, Cheyenne Mountain, Cave of the Winds and Pike Peak. If you’re feeling up for a challenging hike then take on the Manitou Incline, located near the Manitou Cliff Dwellings the Manitou Incline is a one mile trail that has an elevation gain of over 2000ft.

For some of the best views of Colorado Springs you should hike up to the Shrine of the Sun, a five story observation tower that also serves as a tomb for the remains of Spencer Penrose. Other notable sites to visit in Colorado Springs include the Glen Eyrie Castle, Garden of the Gods, and Seven Falls. You may also want to take a walk down Old Colorado City, originally slated to be the state’s capitol, Old Colorado City is now a shopping district with several independently owned boutiques, art galleries, and specialty shops. Fans of the Olympics

must visit the United States Olympic Training Center. The Olympic Training Center in Colorado Springs is the flagship training center for Olympic athletes competing in gymnastics, swimming, wrestling, and figure skating among other things. Visitors can take a tour of the facilities year round and can even get a tour of the facilities guided by an Olympic athlete when available.