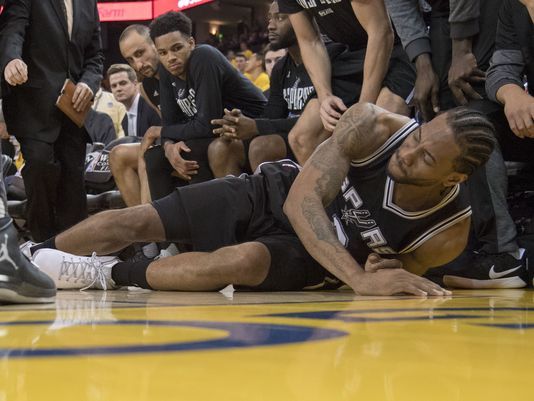 Kawhi Leonard has been ruled out for game two of the Western Conference Finals according to head coach Gregg Popovich.

Popovich informed the media today that Leonard is in the process of undergoing an MRI as well.

Leonard re-aggravated his left ankle injury midway through the third quarter when he attempted a jump shot over Warriors center Zaza Pachulia.

There has been much speculation and debate on whether Pachulia intended to injure Leonard. The play was considered a “dirty play” since he did not allow Kawhi a clear landing space and he stuck his foot in a position where Leonard’s injured ankle would land.

Here’s what Popovich had to say about the play:

Ask David West, his current teammate, how things went when Zaza (Pachulia) was playing for Dallas, and he and David got into it and then about the history he’s had and what that means to a team, what happened last night. Totally unnatural close out that the league has outlawed years ago, and pays great attention to it. And Kawhi’s not there. And you want to know how we feel about it. You want to know how that lessens our chances or not. We’re playing very possibly the best team in the league.

Leonard’s injury is a damn shame to what could have been a historically great series between the Spurs and Warriors.

Prior to the injury, the Spurs were cruising to a game 1 victory at Oracle Arena. Leonard was 7-for-13 from the field with 26 points in 24 minutes of action. He had 8 rebounds, 3 assists and a steal while the Spurs had a 23 point lead.

Leonard departed the game at 7:54 remaining in the third. The Warriors feasted on his absence by finishing the game outscoring the Spurs 58-33 to win game 1 by a final score of 113-111.

The entire series is dependent on Kawhi’s ankle injury. The Spurs have virtually no chance without him in the series and are likely to begin in a 2-0 hole now as he will not play in game 2.

The Spurs were 8.5 point underdogs in game 6 at Houston when Leonard was forced to miss the game. Granted, they won by 39 as James Harden displayed the most pathetic playoff performance by a proclaimed superstar that I ever witnessed but the Rockets are not the Warriors. The Spurs are likely to be a massive double digit underdog for game 2.

Oddshark has the Warriors has a 14 point favorite as of today.

The Warriors have been basically gifted a NBA finals appearance for the third consecutive season. It’ll be tough to say they earned it with Leonard’s absence. Leonard is the leagues second best player and its hard to argue against it.

Besides LeBron James, is their another player who impacts the game more on both ends of the ball besides Kawhi Leonard? Absolutely not.

Leonard is a rare breed who can take over with the ball in his hands on offense and will shut down the opponents best player on defense.

A Warriors – Cavaliers finals seemed inevitable back in July when Durant decided to join forces and leave the OKC Thunder and is even more inevitable now that Leonard is unable to get in the Warriors way.

NBA fans were robbed of what could have been a terrific series and are robbed of watching the games most under appreciated superstar defeat the NBA’s greatest team in terms of talent.