Decided to stay in the south for this week’s edition of Runner’s Weekend. Moving on from Bourbon Country in Louisville and heading to the land of Honky Tonks and Country Music. That’s right we’re talking about Nashville, Tennessee. Nashville is also home to one of the most popular racing events in the country, the St. Jude Rock ’N’ Roll Half and Full Marathon. 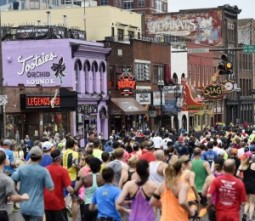 The St. Jude Rock ‘N’ Roll event began in 2000 with just under 6000 runners and has since exploded in popularity, now exceeding 30,000 runners coming out for the annual event. The course takes runners through the sites of downtown, Music Row and the Gulch. True to all races in the Rock ‘N’ Roll Marathon series, there are live bands set up along the course and a post-race concert. For Nashville, the bands on course and post-race concert are usually country. So, if you enjoy country music while you run then the St. Jude Rock ‘N’ Roll Half and Full Marathon in Nashville is perfect for you.

Now to enjoy what Music City has to offer, but where do you start?

Nashville is well known for their nightlife, which we will get to later on, but there is plenty to see and enjoy during the day as well. Country music fans must make a stop at the Country Music Hall of Fame. One of the largest museums dedicated to music, the Country Music Hall of Fame houses thousands of sound recordings, photos, and articles of clothing worn by country music legends. Inside you will also find a wall of Gold and Platinum Records as well as Elvis’ 1960 “Solid Gold” Cadillac Limousine.

Partnered with the Country Music Hall of Fame is

RCA Studio B. RCA Studio B is famous for being a part of creating the Nashville Sound. Daily tours of the studio are available for those who wish to get an inside look at the studio where many country legends recorded their songs such as; Elvis Presley, Dolly Parton, and Willie Nelson. 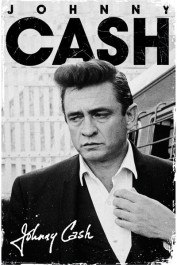 If you are a true country music fan, then you surely know the legends Johnny Cash, Patsy Cline and George Jones. Just a few blocks away from the Country Music Hall of Fame you will find the Johnny Cash Museum. This museum is fully dedicated to the “Man in Black” and houses the largest collection of Johnny Cash artifacts and memorabilia in the world. Inside you will find instruments, costumes, handwritten lyrics and personal letters that chronicle Cash’s legacy. Located on the 2nd level of the building housing the Johnny Cash Museum is a museum dedicated to the legendary and tragic life of Patsy Cline. Selling millions of records after a plane crash took her life at the age of 30, Patsy Cline is viewed as an icon on the level of Johnny Cash and Elvis and was honored as the first female solo artist inducted into the Country Music Hall of Fame. Along the riverfront is another small museum dedicated to the life and legacy of Country Music Hall of Famer George Jones. Jones’ had a tremendous 61 year music career in which he compiled over 150 hit songs. 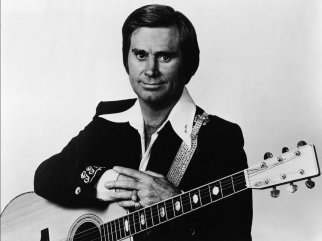 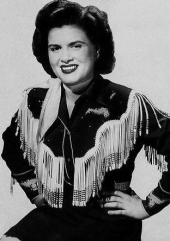 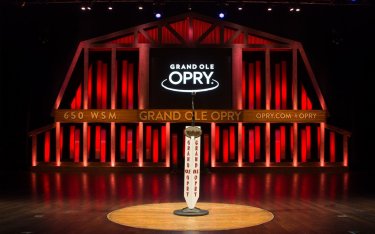 while also hosting the Opry Country Classics on Thursdays and several other concerts throughout the year. In 1974, the Grand Ole Opry relocated 20mins outside of the city to the Grand Ole Opry House. The show is a must-see for country fans of all ages and may feature a living legend, Country Music Hall of Famer, or a rising star in the world of country music.

Not a fan of country music? That’s alright, Nashville has plenty of other attractions for you to enjoy.

Nashville is home to the Nashville Predators (NHL), Tennessee Titans (NFL), Nashville Sound (Triple-A MiLB), and Vanderbilt University (SEC of the NCAA). Nashville is also home to the second oldest continually operated race track in the US, the Fairgrounds Speedway. 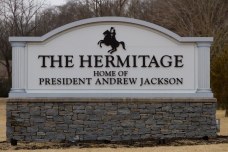 Outside of the city is Hermitage Farm, a historic plantation that was owned by former President Andrew Jackson. The plantation and museum at Hermitage Farm are now open to the public. The museum is dedicated to both the life of Andrew Jackson and the antebellum South. The mansion is the most accurately preserved presidential home in the country and is the 4th most visited presidential residence behind the White House, Mount Vernon and Monticello. Another popular plantation to visit in Nashville is the Belle Meade Plantation. The 30 acre plantation now serves as a museum to the public. On the grounds is a winery, visitors center, a reconstructed slave quarters and several original buildings, including the Harding cabin.

A neat place to go and relax is Centennial Park. The 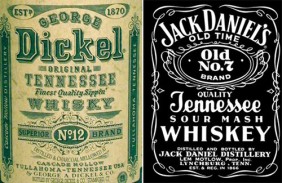 If you came to Nashville hoping to visit some Tennessee Whiskey distilleries then you may have missed your mark. Unlike Bourbon in Louisville, the prominent distillers of Tennessee Whiskey are not located in Nashville. However, if you have a day to spare, and a designated driver, then you can hit the top Tennessee Whiskey distilleries in one day. You can start by doing a tour of George Dickel about an hour and 20mins south of Nashville. Continue making your way south another 30mins to Jack Daniel’s and then end at Prichard’s, another 20mins south of Jack Daniel’s. Prichard’s is just over one and a half hours from Nashville. Closer to Nashville is the distillery of Collier & McKeel and Prichard’s Distillery at Fontanel.

If the distilleries aren’t an option for you then don’t worry there’s plenty of whiskey flowing through downtown Nashville. Nashville is well known for their Honky Tonks, or bars that offer live country music entertainment. 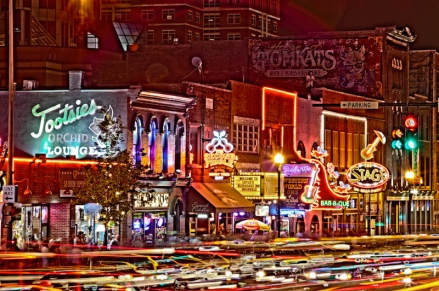 In fact there are so many Honky Tonks in Nashville that it would take several days to complete a true Honky Tonk Bar Crawl along Broadway. Along the quarter mile stretch from the Cumberland Riverbank to the Bridgestone Arena is the place to be for good quality live entertainment, food, and drinks. Of the over 18 Honky Tonks in that area you will be sure to find what you’re looking for. Each Honky Tonk offers live music all day long and keep the music going until after midnight every day of the week. Some places that you must stop at are Honky Tonk Central, The Stage, Legends Corner, Tootsies Orchid Lounge, and Tin Roof. Other locations for great Honky Tonks is Division Street where you should visit the Loser’s Bar, check out the skeletons in the basement of Red Door Saloon, and if you happen to be in Nashville on a Monday then you must go to the Winner’s Bar for their “Saturday Night Right.” You should also check out Bourbon Street Blues in Printer’s Alley. For more info on the Honky Tonks along Broadway, check out Thrillist’s Ratings of Every Bar on Lower Broadway.