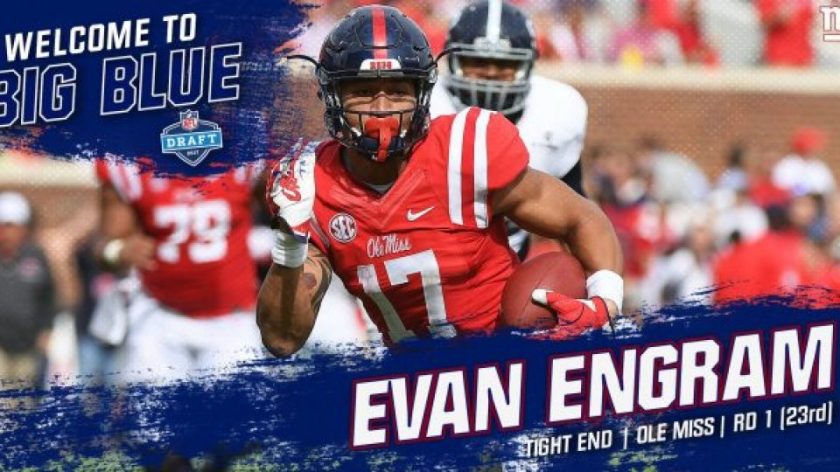 I freaking LOVE it.

This offense is going to be lethal.

I’ll be the first one to admit that I had no idea who Evan Engram was. No idea. Not a clue. Didn’t even know he existed. I was shocked when I heard the name. At first, i was like “Who? Who did we just draft?” And immediately I texted in the groupchat with myself, Mike and Bobby  , and instantly we thought we screwed the pick up.

Well, Engram is a Tight End from Ole Miss. That’s what I knew after we drafted him.

We thought Evan Engram is too small, can’t block and just we don’t need him.

But then I did some research, and boy were we WRONG.

This kid is going to be a star.

Find me one linebacker than can guard a 6’4″ Tight End, who has amazing hands, a great vertical, and runs a 4.42. Don’t research it. I’ll tell you right now. You can’t. Engram is a nightmare to opposing defenses.

Basically, Engram is a glorified slot Tight End. Unstoppable. And pair that with Brandon Marshall, Sterling Shepard and Odell Beckham Jr, you’re looking at one of the most lethal offenses in the NFL. Oh, and also, we still have a top 5 defense in the NFL.

Giants fans get excited. We got a diamond in the rough here. He is going to be a BEAST.

I don’t want to be this guy though, because i jsut got you all pumped up, but if we still can’t find offensive lineman to keep Eli Manning upright, it really won’t matter….

Welcome Evan Engram to the GREATEST FRANCHISE IN SPORTS