So, if you are a more casual runner then the Boston Marathon may be a bit out of range for you. But that shouldn’t stop you from taking in the sites and running the streets of Boston. The city of Boston is host to several great runs including the Red Sox Run to Home Base 9k discussed in a previous post. Two races that I will focus on in this post are the BAA Half Marathon and a race just over an hour south of Boston, the Cape Cod Marathon. 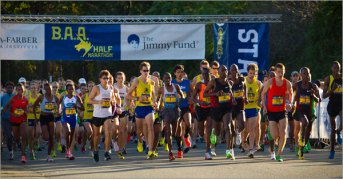 The Cape Cod Half & Full Marathons are full of beauty as the out and back half marathon course hugs the Falmouth Coastline of the Nantucket Sound. Along the course runners get a great view of Martha’s Vineyard just across the sound. The full marathon follows a similar path along the Falmouth Coastline before turning up and looping around the city. Runners also get the chance to run by Nobska Point 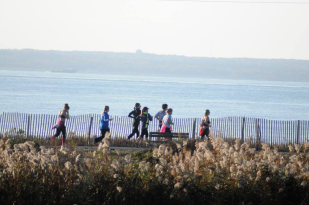 Now that you have selected your race in Boston, what is there to do during your free time?

Boston is a city rich in American History and there are plenty of historic landmarks and museums to get your fill. The most efficient way of seeing all the history is by starting out with the Freedom Trail. This 2.5 mile route, marked with bricks, winds through the city making stops at 16 historic sites between Boston Common and the Bunker Hill. Stops along the trail include the Granary Burying Ground, Benjamin Franklin Statue,  Old State House, site of the Boston Massacre, Faneuil Hall, Paul Revere House and the USS Constitution. As an add-on, Boy Scouts who hike this trail may be eligible to receive the Historic Trails Award.

relate to Poe and are mostly centered within close range to Boston Common. Sites around Boston Common include the birthplace of Poe (now a parking lot), Edgar Allan Poe Square, the shop that published his first book and the publication office of “The Tell-Tale Heart.” Also, just outside the city of Boston is Fort Independence where Poe served with the 1st United States Artillery Regiment.

Don’t feel like you need to spend your whole trip within the city limits of Boston since there are a number of great places to see just outside the city. Boston has some great breweries situated all around the city, but one of the most popular brands worldwide is just 30 minutes south of Boston Common, Samuel Adams. Samuel Adams Brewery offers free tours Monday through Saturday, though they do request a $2 donation to support local charities. The 40 minute tour takes visitors on a behind the scenes look at the process of brewing their beer and ends with a sample of some award winning beers.

If drinking isn’t your thing then maybe you would enjoy

to walk among the prestigious at Harvard University. Just 15 minutes to the west of Boston Common is, Harvard is the oldest institution of higher education in America. Visitors can take free guided historical tours of the school led by current students throughout the school year and also offers a Harvard Military History Tour in the summer and fall. If you wanted to tour Harvard Yards on your own then you can purchase a tour pamphlet from the campus office. There are also audio files for each building in Harvard Yard that can be downloaded from their website and comprise a full audio tour. Other colleges in the area that may be of interest are Boston College and Boston University.

A couple of hours south of Boston visitors can spend the day on Martha’s Vineyard. You will need to take a ferry across the sound to reach Martha’s Vineyard, but when you get to the other side you will be in awe of it’s beauty. There are 5 lighthouses on the island and several beaches. A popular tourist attraction on the island is the Aquinnah Cliffs, an arrangement of beautiful clay cliffs. A unique feature of Martha’s Vineyard is the Island Alpaca Company, a 19 acre farm filled with Huacaya alpacas and llamas. There is also the Flying Horses Carousel, the oldest running platform carousel in the country.
For the sports fan, Boston has many exciting sporting events to keep you entertained. Whether you visit Boston during the baseball season or not, visitors must visit the historic Fenway Park, the oldest Major League Baseball ballpark that is home to the infamous Green Monster. Other teams in the area include the Boston Bruins (NHL) , Boston Celtics (NBA), New England Patriots (NFL) and New England Revolution (MLS).