It’s about damn time. My god my stress level and worrying can finally go down. As you all know, in “The Team” page, I am an avid Kansas basketball fan. Long story, for a different time. But for some reason, Wayne Selden has always been my favorite player. Every Kansas game I’d stress over the fact if he didn’t do well. I have never met Wayne, yet i hope some time soon I can, but I feel like Wayne and I have been through it all together. I know, just hear me out.

I always scout players if they’re considering Kansas. And when i watched tape on Wayne, I thought to myself, “yeah, this guy is going to be a star.” And when he committed to Kansas, I was thrilled, and he proved to be a star at Kansas. In his junior year, he won a gold medal for Kansas in the World University Games, after averaging over 19 points per game, and receiving MVP of the tournament. In the regular season, Selden averaged, 13.8 points, 3.4 rebounds and 2.6 assists in 29.9 minutes while shooting 47.4 percent from the field, 39.2 percent from three-point range and 61.2 percent from the free throw line. Wayne led the Jayhawks to the Elite 8, only to lose to the eventual National Champions Villanova. No shame in that.

Wayne ended up declaring for the NBA Draft and after years of watching him and scouting him, I was ready to see him thrive in the NBA. I was ready for the NBA draft. I knew Wayne was probably going to be a second round pick, but I did see some mock drafts where he might be drafted at the end of the first round.

So as I watched, pick after pick, I grew more and more impatient. Wayne wasn’t getting drafted. I knew his draft stock was going to drop after he had microscopic knee surgery right before the combine, but I just figured someone would take a chance on him. He’s a 6-5 shooting guard, who weighs 230 pounds and super athletic and can shoot the 3. A great NBA prospect.

Wayne wasn’t drafted. I was crushed. And I know he was too.

But Wayne isn’t someone to give up. He never has been and never will be. I used so much data on my phone for the next month. I checked twitter constantly. I kept refreshing the page to see if someone picked up Wayne for the Summer League.

And then the Summer League started and still nothing. He still wasn’t on a team. And if you don’t get an invite to the Summer League, odds are you’re going to play overseas. I didn’t want  Wayne playing overseas. I wanted to watch him thrive in the NBA. Because I know he could.

Finally, Wayne tweeted a picture of the Memphis Grizzlies locker room. I figured that he was signing with the Grizzlies. I immediately checked the Grizzlies roster to see if there was any spots open for him. There wasn’t really.

After that tweet Wayne sent, it still took days to get the news that he signed with the Grizzlies, to a non-guaranteed contract. They announced that he wasn’t going to play in the Summer League so he could fully heal from the knee surgery.

Wayne played with the Grizzlies in the preseason. He did well in the five games and scored 17 points in his final game. I thought he was going to make the final roster spot after a strong preseason.

He didn’t and he was cut.

Days went by and I was still refreshing my timeline, wondering what will happen now. D-league? Overseas? Anything?

So a couple days later and I wanted to read his stats on his Wikipedia page. Just to rehash a little bit and then I saw “Iowa Energy”. I immediately looked up the Iowa Energy roster on their website and it was true. He signed with the D League Iowa Energy, the affiliate team to the Memphis Grizzlies.

I watched his D-league games on Facebook Lives, I downloaded the D-League app on my phone to keep myself updated on his stats.

In 35 games for the Iowa Energy, he averaged 18.5 points, 4.8 rebounds and 2.9 assists in 30.6 minutes. He was dominating and even got national headlines after doing this:

Wayne was doing well but he wasn’t getting the call up. There were already over 20 D-League players during the 2016-2017 NBA season who got called up the NBA. Wayne wasn’t one of them.

Then Finally, Wayne got the call.  I got the notification that I’ve been waiting months for, Wayne Selden signed a 10 day contract with the New Orleans Pelicans !

Wayne Selden was in the NBA, and I couldn’t be happier.

Wayne started 3 games for the Pelicans and averaged 5.3 points and 1.7 rebounds in 15.7 minutes. He scored a career high 11 points in his 3rd start. 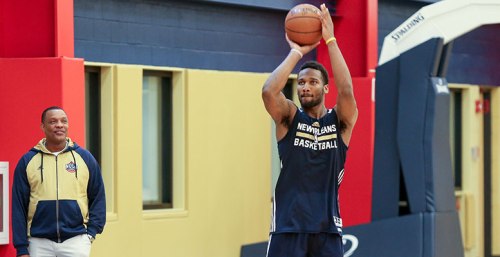 But his 10 day contract was up and the Pelicans had to make a decision.

But the Grizzlies made that decision for the Pelicans.

Per NBA.com, “Memphis Grizzlies General Manager Chris Wallace today announced the team has signed guard/forward Wayne Selden Jr. for a remainder of the season to a multi-year contract. Per team policy, terms of the deal are not disclosed.”

The Grizzlies realized they should’ve never let him go to NOLA in the first place. Wayne Selden should be part of the Memphis Grizzlies. They were the ones to give him a shot and help make his dream come true.  Now Wayne is a Grizzlie and he is going to thrive.

And Wayne Selden is here to stay.

Oh, and he’s also capable of doing this at any moment:

Rock Chalk, Wayne. I’ll always be rooting for you.