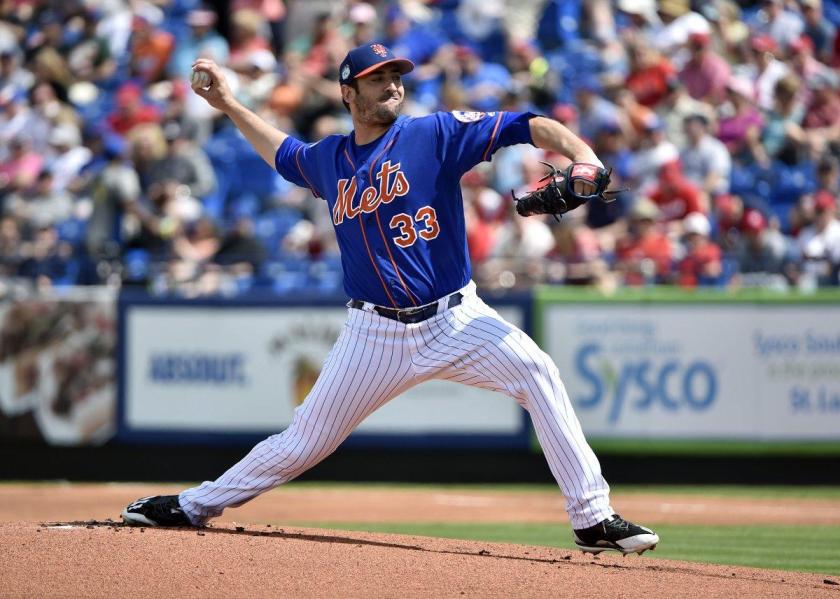 PORT ST. LUCIE — Matt Harvey is trying to slow it all down. Facing opposing team batters for the first time in eight months after a major surgery, the Mets right-hander struggled with his fastball command and decreased velocity Sunday, topping out at 94 miles per hour.

But he was happy with the slow start.

“Obviously it’s been eight months since I played against another team. The biggest thing was going out there and trying, I guess get my mechanics back against another team,” Harvey said after giving up four runs in 1.2 innings against the Cardinals. “Today was kind of the first step getting my feet wet in game action and I felt it went pretty well.”

The Mets’ 2017 hopes depend on four starters coming back from season-ending surgeries, including Zack Wheeler, who is trying to come back after missing two seasons because of Tommy John. The Mets potentially have one of the best rotations in baseball if they can all make it back healthy this season. So there is some impatience to find out.

On Sunday, Harvey made it clear that there are no quick and easy answers, especially with him.

Compared to the Tommy John surgery Harvey fought his way back from in 2015, there isn’t much with which to compare his Thoracic Outlet Syndrome rehab. The condition, which compresses the blood flow and nerves from the shoulder to the arm, forced older pitchers like Josh Beckett and Chris Carpenter into retirement. For Chris Young, however, having the surgery to remove a rib and create better circulation saved his career and allowed him to return to win a World Series with the Royals over the Mets in 2015.

So the Mets aren’t sure what to expect in his rehab, and Sunday left his velocity and fastball command open to question.

Harvey allowed four runs, including a three-run homer, and was pulled after getting two outs in the second inning. He struck out three, including two in a quick and clean first inning. Harvey threw 39 pitches. Two scouts at the game said that Harvey’s fastball ranged from 92-93 and topped out at 94, which is down from the 96 mph he averaged in 2015. When he made his Grapefruit League debut that year, after missing an entire season to Tommy John, Harvey’s heater was hitting 99 mph.

Catcher Rene Rivera explained that they were more focused on his mechanics and not ramping up. Harvey said he physically feels like he can ramp it up, but he wants to be smart about it.

“I think this year, I am taking things a little bit slower, realizing I want to get into the fifth or sixth inning before I really start ramping it up,” Harvey said. “It’s still obviously the beginning of March, I realize there is time for the velo to pick up.”

According to a scout at First Data Field Sunday, Harvey was overthrowing a bit on his fastball and ended up yanking it high over the plate in the strike zone. That he was throwing across his body as he tried to work inside and out could account for some drag on his arm speed, according to another scout.

Harvey had a similar assessment of his fastball.

And he was happy with his changeup Sunday, which he took as an encouraging sign.

“That was a big pitch for me. That’s when I know I can get extension and get feel, when that’s working well, I know things are going well,” Harvey said. “I felt confident throwing that. Felt good throwing the slider.

“The fastball velo is going to come. It’s only a matter of time.”

After two major surgeries in four years, Harvey is embracing a slow, deliberate return this time.